A magical three part dance performance based on Greek myths.

Choreographer Duda Paiva interprets three Greek myths through dance and puppetry: King, Nikè and Cyclops. Magical tales of greed, stupidity and entanglement, with gripping, priceless encounters between the dancers and the life-like puppets.

King is the story of a self-indulgent Greek hero who is punished by the gods with insatiable hunger. Driven by gluttony, he devours everything around him, even his own daughter.

Nikè is the goddess of victory. This winged beauty descends into the human realm to award men with glory and fame. To keep the angel here with them, they break her wings and lock her up in a palace, with all its consequences.

Cyclops is a dull-witted giant who is cunningly and ruthlessly duped by the Odysseus and his companion. It is comical as well as cruel to see the dancers grab power and leave the battered colossus behind.

“The Greeks is a dance triptych that makes you laugh, moves and sometimes even frightens you. And all within one hour!" ”

“The Greeks (…) compelling and mind-boggling for young and old. (…) Wonderful performance, in which dance and the movement of the puppet enter into a total unity and receive enormous energetic power.”

"The Greeks is an extremely successful encounter of Duda Paiva and youth theatre company Maas, which has everything it takes to become an international success. For children and parents."

“In the enchanting performance The Greeks you sometimes no longer know the difference between puppets and humans. The puppets are made of foam, but look just like living beings.”

The Greeks is a great performance with dance and beautiful music. The puppets seem to be really alive! I give the performance an 8 out of 10.” 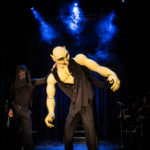