In Angel Duda Paiva mixes dance, puppetry and belief into a story of godless love.

A stone grave angel and a tramp, fallen upon hard times, create their own world in a cemetery. In this ambivalent world the angel takes the tramp into a dream in which imagination and reality seem to intermingle, in which existence reveals itself as hell and heaven at the same time.

Angel is produced by Korzo Theater for CaDance 2004 en is and is financially supported by the Fonds Podiumkunsten.

"His modern puppetry is magical and immersive. Performer and puppet bother each other, they dance a wild tango and ecstatically make love. Subtly developed is the deeper, underlying theme of the relationship between man and puppet, living creature versus thing." 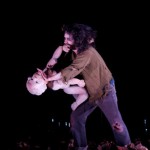 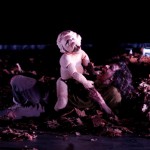 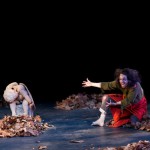